I love how the three year old brain works. Its trying to make sense of the world around it. Yesterday Preston pointed to my breast and told me he liked it. He then asked if he could eat it. We had a small discussion about how my breasts no longer make milk for him to drink because he's no longer a baby. He mulled this over a bit in his 3 year brain and moved on.

This morning he pointed to the same breast and told me that it doesn't make milk for him to eat. I told him that was correct and reinforced that he's a big boy and breastmilk is for babies. He then pointed to my other breast and in all seriousness asked if it makes juice. "No, Preston. It doesn't make juice either."


- Posted using BlogPress from my iPhone

Preston had his first interaction with a urinal. This led to having to "go potty" twice within less than 5 minutes. Do you flush them? There was a knob at the top that I refused to touch

- Posted using BlogPress from my iPhone

I cannot believe it's been so long since I last posted. I think about my blog often and debate on whether to come back or not. The best part of blogging for me is posting and seeing  pictures. However, as Preston gets older, I worry about exposing him to the www in such a public forum. Is it possible to make my blog private and keep my existing readers? I miss journaling about his growth, how our family has changed, and what it's like to be a mom.

Flying with a Toddler

I was visiting West Philly Mama blog which made me think of our upcoming travel plans. We ar heading to NYC next weekend and then Florida a few weeks after that. For the most part, I'd consider Preston a well traveled baby all considering he's only been on the earth for 18 months. I would say that he's probably flown roundtrip close to 10 times. However, the older he gets, the harder it is to fly with him. For the most part, I fly with him alone. So I'd like to consider myself pretty experienced in this department. I can get through security with a baby, carry on suitcase, diaper bag and stroller in a breeze. However, it was definitely challenging the last two times. He's at an age now where nursing him doesn't put him to sleep instantly which was always my go to plan. He's also curious about everything and everybody. Even though I buy a lap child ticket, we've been pretty fortunate about scoring a free seat so that he can have his own (with the exception of one flight). However, the one flight he literally pulled the shade up and down for half of the flight until I moved his seat. He's also incredibly fascinated by the tray table and yes, no matter how much I try, he's the kid who will kick the back of your seat because what else can you do with your legs on a 2+ hour flight when you can't walk around? I know he must drive the people around him crazy.

One thing I've learned about Preston is that he needs containment in order to fall asleep. This could mean being in the Ergo, strapped in to a carseat or simply being in his crib. We usually don't take the car seat when visting my mom because 1. there's no guarantee that we will get a free seat and 2. they have one for him so it would be pointless to add another heavy item when I'm already traveling solo. Someone told me about a CARES harness which looks good in theory but it expensive (SN- if anyone has one that they are willing to sell, please let me know).

So I'm going to take some tips from West Philly Mama and his Pediatrician...pack lots of snacks, go to the dollar store and buy some cheap new toys that we can pitch afterwards, and download some episodes of Sesame Street or Barney on to my iPhone.

If anyone else has any other tips for flying with a Toddler, please let me know.
Posted by Lisa at 3:16 PM 1 comment:

I find this book very strange but oddly enough I'm drawn to it. So drawn that I may actually buy it to add to the little one's library.

It's about the love between a mother and her son that transcends over time. Each night when he's asleep she takes him in her arms, rocks him back and forth and sings to him her own little song. However, she does this little ritual even when he's an adult and living in his own place across town. She takes her ladder, climbs in to his room and rocks him. I almost died of laughter when I read it for the first time. I have so many questions like what the hell does his wife think? What if they were having sex? Why doesn't he wake up? Does she have difficulty sleeping? Why doesn't she ask for a key? Quite honestly, I think it would make an awesome SNL skit.

- Posted using BlogPress from my iPhone
Posted by Lisa at 2:30 AM 4 comments:

Growing up we didn't celebrate Halloween. The first time I dressed up was in college. Why didn't we celebrate? I had a very proud father who would say "if you want candy, we will buy it for you. There's no need to go begging for it." You can't miss something you never had so it never really bothered me. And while it's typical to carry on family traditions, this is one that we may break.

Last year my friend invited us to TOT in her neighborhood. It was held the Saturday before Halloween and we had a blast. I do have to admit that it did feel weird "asking" for candy. Sometimes I had Danielle do it. I felt a lot more comfortable taking him to the Halloween parties at the library and Barnes and Noble than going door to door.

This year at the last minute I decided to make his costume. We went to the party at the library and the zoo last week. However, he missed TOT with my friend on Saturday because it was snowy, wet and cold. I was totally unprepared for the snow and there was no way I was sending him out in the cold in only a Fall jacket. So we stayed home.

I was all set to carve pumpkins last night but I think because I bought it several weeks ago at when we went to the farm that I couldn't cut it open. So we settled for stickers instead. What better way to start our Halloween celebration off this morning than with pumpkin and raisin pancakes and apple sauce for dipping, playing outside in the leaves, Halloween stories, coloring, and right now...a nap. Later he will help pass put candy to the 10 TOT we get each year.

It's like pulling teeth to get him to look at the camera these days. 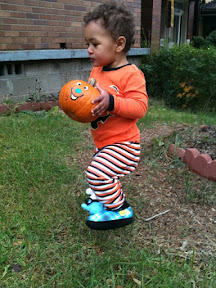 So surprised that he ate not only a bite but all of the pancakes. Yay!!!! 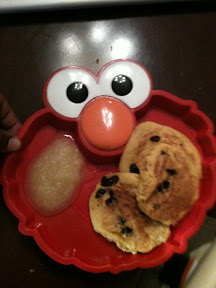 If anyone ever needs a toddler bib recommendation, I highly recommend the baby bjorn. 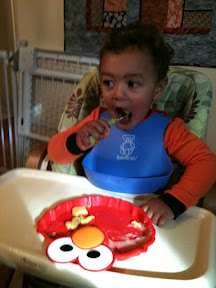 Giddy up cowboy! Making his outfit was so much fun. 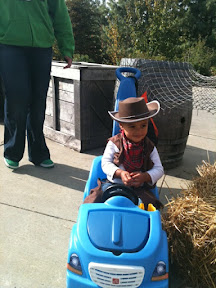 Posted using BlogPress from my iPhone
Posted by Lisa at 1:33 PM 1 comment:

A few people are curious about how we discovered that my little guy had an allergy. Over the summer, when he was about 14-15 months old, I gave him some Jif With a Touch of Honey Peanut Butter on crackers as a snack. I did this about three times and he didn't react. We ran out of the PB and a few weeks later while I was in Whole Foods, I picked up a jar of their organic brand. Once again, I gave it to him as a snack on crackers. This time around he reacted. His eyes became red and itchy, he broke out in pimples, and his face turned red and splotchy. He couldn't stop rubbing his eyes. I made the decision to give him Benedryl which he had never been given before and the only reason we had it in the house was because our dog had a reaction to shots the year prior. It did the trick. In the meantime, we had called our Pediatrician but when they called back it went straight to voicemail and because we had his symptoms under control we never called them back. I just figured we would avoid peanut butter.

During his 18 month check up, I added this to my list of questions. I wasn't sure if it was a brand issue or an overall allergy issue. She said it had nothing to do with the brand. She suggested blood work to see if he would test positive and he did.

The Allergist said that because he was exposed and reacted at a young age (<2), there's a likelihood that he can outgrow it. I'm not sure what the theory is behind that but in the meantime, we plan to just stay clear of nuts. He also said that there is a significant increase in peanut allergies among children compared to years ago when we were younger.

We stopped off at Whole Foods today and it was one of my first times shopping since learning of the allergy. A lot of packages indicate if the product contains nuts or is processed in a plant where products containing peanuts and tree nuts are processed. I ended up putting a lot of things back. It's a really difficult decision to make. Do you put the items back or do you get them? For example, I've bought Preston Nutrigrain bars before. Whole Foods had their own brand on sale today but the package said it was processed in the same plant as other nuts so I put it back. The rational part of me wanted to buy it thinking he's had a similar product before but the other part of me said, if he gets sick, I will be ridden with guilt because I knew the warning on the package. On my way home, I decided that I'm going to live by the rule that if he's had it in the past, I will buy it.

I'm starting to see how it may be easier to make my own goodies for him. At least I'll be more aware of what's going in to it. I've been inspired to make my own pumpkin pancakes from scratch this weekend. We will see how that goes!!!
Posted by Lisa at 2:01 PM 2 comments:

Lisa
I'm a newly 30 something. And although I was dreading it, I've realized the world hasn't ended and I'm determined to make the best of it. I've been partnered to the same wonderful person for the past seven years and started ttc in Jan/Feb 2007. While this journey has been difficult and emotional, it has been all worth it because on April 11th, I gave birth to the most amazing little boy. He is the absolute love of my life and I love being his mother.

Little Tidbits about me

1. I always read the last page of the book I'm reading before I finish it.
2. My favorite alcoholic drink is Bailey's.
3. My favorite vacation was for my 29th birthday when we went on a cruise to the Bahamas.
4. I am the youngest and only girl in my family.
5. My favorite show is Brothers and Sisters.
6. I absolutely HATE eggs.
7. I have control issues.
8. I am incredibly cranky when tired or hungry.
9. I cannot live without my Tivo, Ipod, and lipgloss
10. I'm easily annoyed when people who you were not friends with in high school want to friend you on facebook. If we weren't friends then, what makes you think we'll be friends now?

It's not easy being this cute 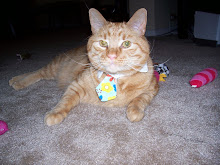